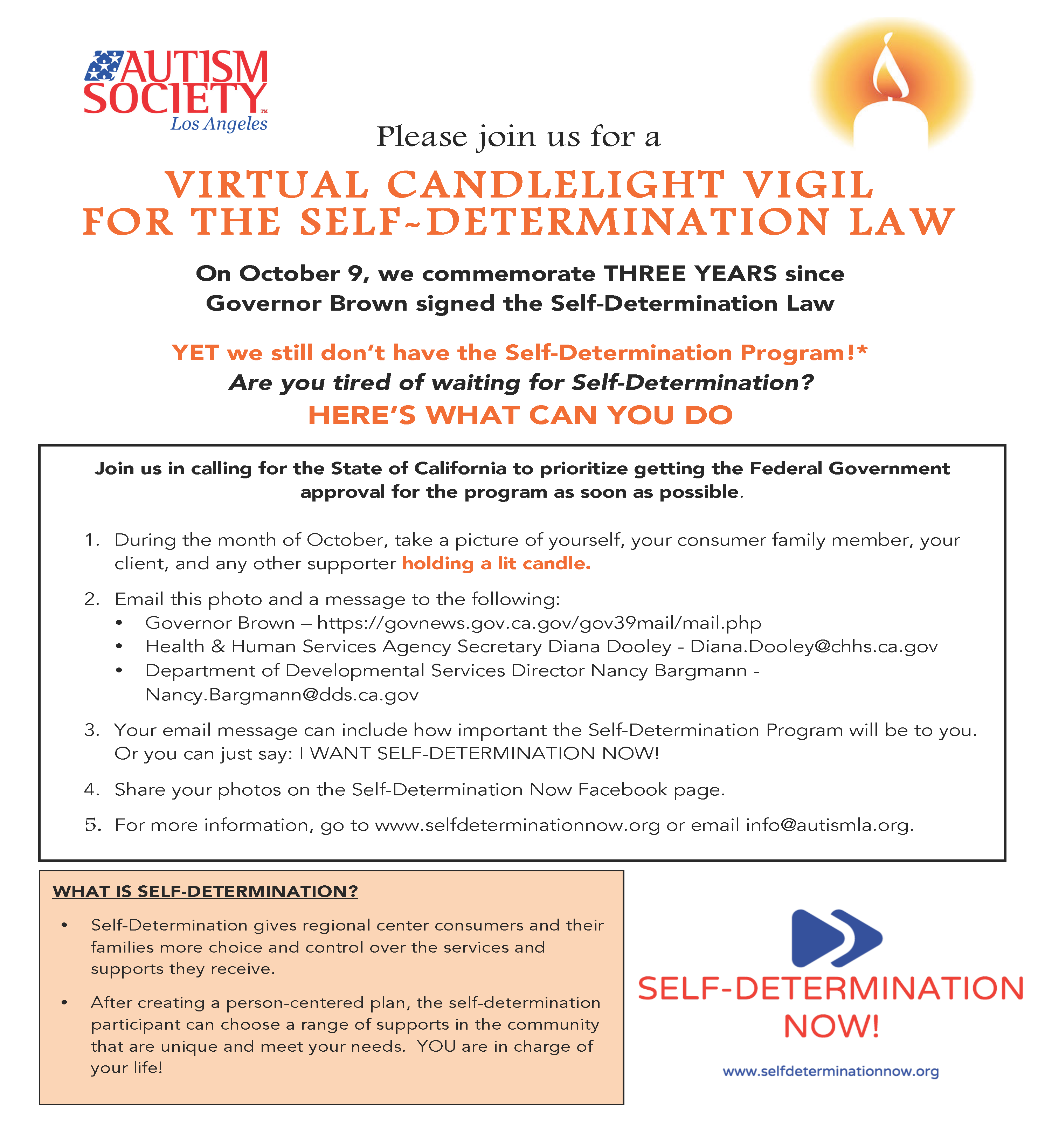 It has been almost two and a half years since SB 468, the Self-Determination Bill, passed unanimously through the California Senate and Assembly and was signed by Governor Jerry Brown in October 2013. The consumers and families who worked so hard to pass this law are asking why it hasn’t gone into effect by NOW.

The hold up is that the Self-Determination Program cannot go into effect until California gets federal matching funds approved. It took almost two years to apply for this funding and there is still work to be done. This process is taking too long and must be prioritized NOW.

The California Department of Developmental Services (DDS) and Department Health Care Services (DHCS) need to work closely with the U.S. Centers for Medicare and Medicaid Services (CMS) to ensure approval of the federal waiver. We urge CMS to recognize the significance of self-determination to the community and call on California to utilize the technical assistance offered by the federal government NOW.

Thousands of individuals with developmental disabilities who desperately want freedom, choice, and control over their services are waiting for the Self-Determination Program to get started. The delay is unacceptable. We need Self-Determination NOW.

Please join our campaign by signing up at selfdeterminationnow.org. You will receive updates and sample letters to send in support of our efforts. Help us fight for SELF-DETERMINATION NOW!

In October 2013, California Governor Jerry Brown signed into law Senate Bill 468, creating a statewide Self-Determination Program that offers individuals with developmental disabilities choice and control over the services and supports they receive. The bill was authored by Senators Bill Emmerson and Jim Beall and Assemblymembers Bob Blumenfield, Holly Mitchell, and Wes Chesbro, and was sponsored by the Autism Society of Los Angeles and Disability Rights California. It was supported by almost every major disability organization in the state. The bill passed unanimously in the Senate and Assembly. It became the first law of its kind in the nation and a huge leap forward in the civil rights of individuals with developmental disabilities.

The new California Self-Determination Program is based on a 17-year old pilot program in which almost 200 individuals participated in self-determination in five regional centers. The pilot program, which continues today, has been a resounding success.

What has been happening since the Self-Determination Law was passed?

Federal Funding Approval – The law requires the state of California to apply for federal matching funds (called a waiver) for the Self-Determination Program. It took almost two years to submit the waiver application correctly. In December 2015, the U.S. Centers for Medicaid and Medicare Services (CMS) sent a letter to California with 180 questions about the application.

The most significant concerns lie in how the Department of Developmental Services and regional centers will ensure that the services purchased through the Self-Determination Program will comply with the new Federal Settings Rules, which require services be provided in settings that are integrated in and allow full access to the greater community. As of March 1, 2016, DDS has not sent answers to the questions.

Stakeholder Workgroup – Since December 2013, DDS has been meeting with stakeholders about the development of the waiver application and the implementation of the law.

Local and Statewide Advisory Committees: By June 30, 2015, regional centers and regional offices of the State Council on Developmental Disabilities were required to have appointed and hold a meeting of their self-determination Local Advisory Committees. All 21 advisory committees have been meeting and the statewide advisory committee held its first meeting on March 3, 2016. These committees will advise regional centers in the implementation, develop training materials and best practices, and help do outreach and training of consumers and family members.